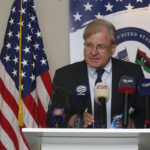 Date: Saturday, May 14, 2022
499 Views
The U.S. Embassy in Libya has announced that it “fully supports the temporary freezing of oil revenues in the National Oil Corporation account at the Libyan Foreign Bank until there is agreement on a revenue management mechanism.”
Restoring Libyan oil production is important for the Libyan people and for the global economy, the Embassy said in a statement on Saturday.
Agreement on a mechanism for transparent management of oil revenues is imperative in order to achieve this, as discussed by Libyan parties in the April 1 meeting of the Berlin Process Economic Working Group, it noted out.
The Mechanism should incorporate agreement on priority expenditures, transparency measures, and steps to ensure oversight and accountability, the statement explained.
The U.S. is prepared to provide technical assistance as requested by the Libyan parties to help with such a mechanism., according to the Embassy.
Progress on these important issues will contribute to a more stable political environment and help restore momentum toward the parliamentary and presidential elections as demanded by the Libyan people, it added.
An official statement issued by the Libyan Parliament Speaker Aqila Saleh had confirmed Saturday the freezing of oil revenues at the Libyan Foreign Bank until “the establishment of guarantees and a mechanism for all Libyans to benefit from this income, in a manner that achieves justice and equality for all.”
Tags:Libya oilLibyan Foreign BankNOCUSA