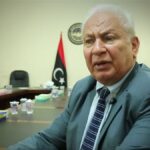 Armed groups in Tripoli are mobilizing their forces in preparation for a “big battle” in the Libya capital, said Ali Al-Tekbali, a member of parliament.

Al-Tekbali, who is also a member of the House of Representatives’ National Defense and Security Committee, told reporters on Saturday that the mobilizations taking place in the capital are “not like the previous ones” because the armed groups are forging an alliance “to control the entire Libyan West”.

The Tripoli MP said that infamous Tripoli-based militant Haitham Al-Tajouri is leading this alliance and seeks to attack armed groups that are affiliated with the Government of National Unity and the Presidential Council.

0 0
Previous : 2831 people test positive for Coronavirus, 35 others dead in Libya
Next : 71 migrants intercepted off Libyan coast