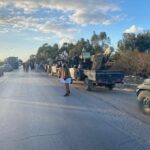 Armed groups are mobilizing in Tripoli to forcefully keep the Government of National Unity in power amid speculations over whether the parliament will form a new interim government, Libyan newspaper El-Enwan reported on Saturday.

Citing unnamed security sources, El-Enwan reported that the so-called Mahjoub Brigade, an armed group affiliated with GNU, was seen re-entering the central of the capital to join other military groups that are already positioned there.

According to El-Enwan, Prime Minister Abdul Hamid Dbeibeh, as acting defense minister, ordered these armed groups to gather in Tripoli to protect his government from getting overthrown.

Sources told El-Enwan that security tensions are intensifying in Tripoli which has become divided between pro- and anti-GNU militias.