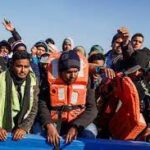 The Bangladeshi security services have arrested a member of an international human trafficking gang for his involvement in the killing of 26 Bangladeshis in Libya in 2020.

Rafiq al-Islam Mal, 38, was arrested at Hazrat Shahjalal International Airport while trying to flee to Dubai on Wednesday night, according to Bengali media sources.

A local security official said the accused used to smuggle people through Dubai to Libya with a promise to send them to Europe to live a better life, after forming a gang in Libya. Besides, he was in the country when 26 Bengalis were shot dead in Libya and he was arrested after being in hiding for two years.

In May 2020, 30 migrants, including the 26 Bangladeshis, were killed and 11 wounded in a retaliatory operation in the Mizdah town in western Libya.

The Interior Ministry of the former Government of National Accord (GNA) stated at the time that the crime came as “a retaliatory response to the killing of a Libyan national from Mizdah, suspected of being involved in human trafficking, by illegal migrants while he was smuggling them.

The Ministry pointed out that “the victims’ families, in retaliation for his death, killed 26 Bengali nationals and four Africans, and injured 11 migrants.