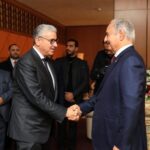 Bashagha: Haftar wants peace because he accepts me as PM

Speaking during a meeting with Misurata representatives on Friday, the former interior minister explained that Haftar’s decision to accept him as prime minister, after years of rivalry between them, proves that he wants peace in the country.

“Would I have accepted Haftar as prime minister?,” Bashagha rhetorically asked his audience. “I don’t think this would have been easy for me accept, yet he did”.

“Since they [LNA] accepted that, we have to acknowledge them for it,” he said. “Because the power of the state lays at the hands of the prime minister, which means they are seeking the security, peace and unity of Libya”.

Libya’s House of Representatives named Bashagha as the new interim leader following the failure of Abdul Hamid Dbeibeh, the incumbent prime minister, to hold national elections in December, something that was agreed to under a UN-brokered peace process.

Dbeibeh has rejected the parliament’s move to replace him and says his internationally recognized Government of National Unity will only hand over power after a national election.