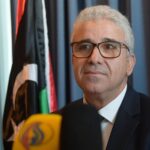 Citing a “security source”, Alsaa’a 24 said that the contract value is “big” because it involves a number of European countries.

J5, whose parent company is Avisa Partners, defines itself as a “venture” which provides governments, organizations, and prominent figures with consultancy services in “strategic communication”, institutional relations and “network engineering”, among other services.

According to Alsaa’a 24, the deal was made in coordination with French writer Bernard-Henri Lévy, who was known for his involvement in Libya during the 2011 civil war, due to his close association with former French President Nicolas Sarkozy.

Bashagha had previously hired a U.S. firm to lobby for him in Washington with a monthly retainer of $50,000, before he terminated the contract shortly after the registration documents were released for public record by the U.S. Justice Department.

Alsaa’a 24 reported that Bashagha chose J5 after ending his deal with the U.S. firm because “French law allows for contract confidentiality and anonymity, unlike U.S. law”.

0 0
Previous : UN condemns “act of hatred” in Libya’s coastal road
Next : Algeria, US agree on need for unified Libya with no foreign interference