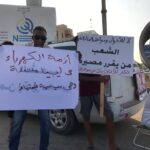 A number of protesters in Benghazi took to the streets on Thursday to demand the holding of the presidential and parliamentary elections as scheduled on December 24.

The protesters raised slogans which say “No to the postponement of the presidential and parliamentary elections”, “No to the extension of corrupt political bodies” and “No to the Muslim Brotherhood, the people are the ones who decide their fate.”