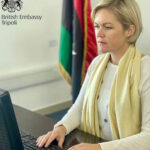 British ambassador: Libya is being let down by its leaders

The British Ambassador to Libya, Caroline Hurndall, said in an interview with Asharq Al-Awsat, Tuesday, that “Libya’s leaders are failing their country,” indicating her desire for real measures that show that these leaders are “ready to put Libya’s interests first, instead of protecting their own.”

In an interview with Asharq Al-Awsat, Hurndall said: “When these leaders fail to make progress, ordinary Libyans lose every day. More than 10 years after their (revolution), Libya must develop, benefiting from its vast enviable natural and human resources.”

She pointed out that “the ongoing political impasse in Libya is not insurmountable. There are solutions out there. But compromise is needed from all sides, focusing on Libya’s future. UK is ready to support efforts to reach such a compromise.”
Hurndall stressed that the responsibility for upholding the arms embargo in Libya “is the responsibility of every member state of the United Nations, and we expect all countries to do so.” And she continued, “The same applies to foreign fighters and mercenaries present in the country. Their presence is also a violation of the arms embargo, and we want to remove them, without delay.”

The British ambassador to Libya rejected criticism of her country’s bias towards political Islam in the region and not only in Libya, and said: “This is not true.” And she believed that “the United Kingdom does not spread any particular ideology in Libya, but encourages all parties to engage in political dialogue to find a way out of the current crisis.”