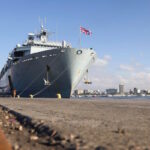 A Royal Navy task group has completed a mission to Libya as part of security operations in the Mediterranean, UK Defense Journal reported.

HMS Albion, flagship of Littoral Response Group North – a UK force designed to react to crises in European waters – sailed into capital Tripoli on Wednesday, becoming the first Royal Navy ship to visit the port in eight years according to a Royal Navy press release.

“Plymouth-based Albion – the Royal Navy’s amphibious flagship – was the floating venue for engagement events with political and military figures in Libya, while sailors and Royal Marines shared expertise with personnel from the Libyan Armed Forces.

That included delivering valuable RN training to the Libyan Navy in firefighting and damage-control techniques, engineering practices, seamanship and harbor surveying, using Albion as their classroom.”

“Being able to work collaboratively with the Libyan Navy has been a fantastic opportunity and one that would have been inconceivable just a few years ago. I hope that in the future we will continue to work together and build a stronger maritime relationship with Libya.”

The Royal Navy add in their news release that members of the Royal Marines Band, who – as well as being world-class musicians – also provide medical expertise from one of the task force’s support ships, RFA Argus, supported events on board Albion, “serenading dignitaries”.