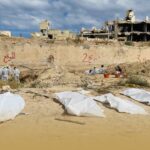 Libyan authorities discovered on Sunday a mass grave, in which 42 bodies were buried, near the premises of a school in Sirte.

The District Prosecution reported the discovery of the mass grave near Ibn Khaldoun school to the General Authority for Searching and Identifying Missing Persons, which sent a field team that exhumed the bodies, according to a statement by the Authority.

DNA samples were collected from the bodies by the field team to aid the forensic authorities in identifying them. The bodies were then transferred to Ibn Sina Hospital in the city.