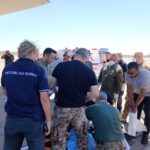 A little Libyan boy arrived on Saturday in Italy where he will receive treatment in the pediatric burn department of the Santobono hospital in Naples, Italian news agency Ansa reports.

The 11-year-old was severely injured in a fuel tanker explosion in the southern town of Bent Bayya, which took place last Monday. According to Ansa, his condition is very serious. He has second and third degree flame burns on 45% of his body and has a high risk of mortality.

More than 70 people were wounded in the deadly incident, which claimed the lives of at least 8 people.

The young boy is one of three victims who were sent to Italy for medical treatment as part of collaboration between Libyan and Italian authorities.

0 0
Previous : Leaders of Libyan and Tunisian central banks discuss cooperation
Next : EgyptAir to operate flights from Tripoli to Sharm El-Sheikh this summer