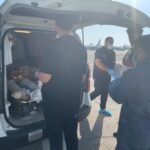 Five people were sent by the Tripoli-based government to Italy and Spain in order to receive medical treatment for injuries sustained from fuel tanker explosion in the southern town of Bent Bayya, which took place last Monday.

According to a statement by the government’s Health Ministry on Friday, four people left Tripoli’s Mitiga Airport on board an Italian military plane ahead of being transported to several hospitals in Italy.

The ministry also announced that, on the same day, another wounded victim was sent to Spain for treatment.

All five were severely wounded and are in a critical condition, the ministry said.

At least 8 people were killed and 70 were injured in the deadly fuel tanker explosion in the southern town of Bent Bayya.

The incident took place during early morning hours when, according to eyewitnesses, a crowd of people gathered around a vehicle carrying a fuel container and began unloading fuel from it, before fire broke out. The blaze spread from the vehicle and into the container, killing and wounding dozens. The cause of fire is yet to be identified.

Tripoli-based premier Abdul Hamid Dbeibeh announced last Tuesday that his government will send 15 wounded Libyans to Italy and 10 to Spain to receive treatment abroad as Libyan hospitals lack technical capabilities to care for those severely wounded in Bent Bayya incident.

Another group of Libyans injured in the same incident were transported by the Egyptian army last Wednesday from Benghazi to Cairo, where they will receive care in the army’s hospital.