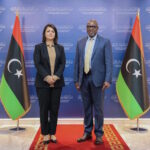 They discussed the latest developments in Libya and agreed on the need to chart a pathway to elections as soon as possible, based on a consensual constitutional framework, according to UNSMIL.
Zenenga reiterated UNSMIL’s commitment to support Libya to overcome the ongoing political divisions at this critical time and resume the path to stability, in line with the outcomes of the Berlin and Paris conferences and the Libya Stabilization Conference as well as relevant UNSCR, UNSMIL said in a statement.
He welcomed recent positive developments including the resumption of oil production, the statment pointed out.
During the meeting, Zenenga extended his condolences to the Minister on the oil tanker incident in southern Libya, it added.
Tags:LibyaNajla al-ManqoushUNSMIL