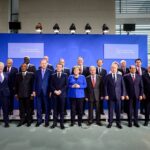 BERLIN – The initial draft of the closing statement of the second Berlin Conference on Libya, scheduled for Wednesday June 23rd, was leaked by the press on Monday.

Italian news agency Nova obtained the draft from diplomatic sources and published the main points of the statement.

The draft statement calls on Libyan parties to hold the presidential and parliamentary elections on time, scheduled for December 24. It also calls for a “balanced and coordinated” withdrawal of all foreign fighters out of the country; and cease military funding of mercenaries.

Closure of migrants detention centers, documenting human rights abuses, combatting corruption, reviving the national economy and providing essential utilities and services for the Libyan people were all addressed in the draft statement, according to Nova.