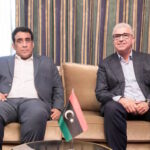 Bashagha commended the role of the Council in addressing divisions in institutions in addition to its “important role in establishing a National Reconciliation Commission that would serve as a starting point and a base for reunification and bringing together the Libyan parties in all regions and cities,” the Media Office said in a statement on its official Facebook page.

In turn, al-Menfi affirmed his adherence to the date of holding the elections at the end of December this year, supporting the work of 5+5 Joint Military Committee, ceasefire, and unification of state state institutions, the statement added.

0 0
Previous : Demonstrators in Bayda demand elections be held on time
Next : Greek FM calls on all foreign forces to withdraw from Libya