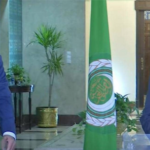 Greek FM calls on all foreign forces to withdraw from Libya

Greek Foreign Minister Nikos Dendias called on all foreign forces, including mercenaries, to withdraw from Libya, stressing the need to adhere to international law and international water law, especially countries that threaten others with weapons and violence.

There are close relations linking the Arab world with Greece, Dendias added in a press conference today with Ahmed Aboul Gheit, Secretary-General of the Arab League, explaining that the world has changed and “the challenges we face have developed.”

The Minister said some countries in the region, that are not affiliated with the Arab League, pose a threat to regional stability through military intervention, whether directly or through proxies, or through their attempts to establish influence and revive religious conflicts that were buried in the sands of the last century.

It is noteworthy that the Arab League signed Tuesday a memorandum of understanding with Greece, stipulating the establishment of political consultations, stressing the close relations between the Arab countries and Greece.

0 0
Previous : Menfi and Bashagha stress the need to hold December elections on time
Next : Dbeibeh to attend Security Council meeting on Libya tomorrow