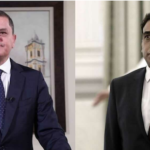 Dabaiba to al-Manfi: Nomination of ministers is prerogative of the prime minister

Dabaiba’s word came in a letter directed to al-Manfi regarding the latter’s invitation to a meeting to consider naming a defense minister.