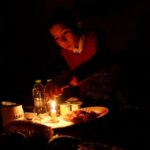 According to the government’s Decree No. 158 of 2021, all the assets of the General Authority for Electricity and Renewable Energies shall be transferred to the General Electricity Company.

The decision comes amid a crisis in power supply in most parts of the country, where power outages reached more than twelve hours per day.

0 0
Previous : Dabaiba to al-Manfi: Nomination of ministers is prerogative of the prime minister
Next : Two US senators issue statement supporting elections in Libya