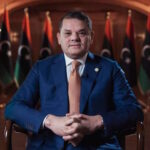 Abdel Hamid Dbeibeh, Head of the Government of National Unity (GNU), said that 10,000 terrorists came to Libya from abroad, including some neighboring countries.

“Some neighboring countries accused us of being terrorists, and there are 10,000 terrorists who entered our country. Where did they come from?” Dbeibeh added, in a speech addressed to the Libyan people, Friday evening.

“We will not accept our accusation of terrorism and extremism, and whoever accuses us, should first go and see from where he brought us terrorists,” he stressed.