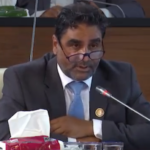 The Government of National Unity (GNU) acts as a party that had won power, not as a government of national unity, said member of the Libyan House of Representatives (HoR), Abdussalam Nassiya.

“The Government was formed primarily by members of the 75 Committee of the Libyan Political Dialogue Forum(LPDF), who supported the Prime Minister’s list, but their actions were as a party that had won power, not as a government of national unity,” Nassiya commented on the speech of Prime Minister, Abdel Hamid Dbeibeh, regarding development plan and lack of budget approval by HoR.

0 0
Previous : Dbeibeh: 10,000 terrorists came to Libya from abroad
Next : GNU can freeze agreements with Turkey because they lack approval from legislative authority, says HoR Speaker