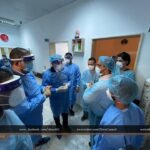 Dbeibeh accuses Zliten Hospital of spreading COVID in the city

Abdul Hamid Dbeibeh, Prime Minister of the Government of National Unity, criticized on Sunday the performance of the management of Zliten General Hospital and accused it of causing spread of COVID-19 in the western city.

Dbeibeh inspected the hospital during his visit to Zliten yesterday, where he witnessed people over-crowding outside of the hospital to get tested and vaccinated.

“This situation is unacceptable,” Dbeibeh said. “It poses a danger to the citizens”.

“Why didn’t the management provide and prepare several places inside the hospital to conduct tests instead of limiting them to one inappropriate place?,” he asked officials at the hospital.

“This is what caused this crowding and you are fully responsible for the spread of the deadly virus,” he added.

During his visit, the Libyan premier met with doctors and medical staff to discuss the difficulties and obstacles that they face in their work. He vouched to take several measures to help improve the performance of the hospital.