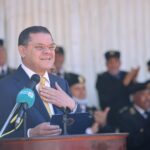 Prime Minister Abdul Hamid Dbeibeh has been accused of lying about his education in the resume he submitted before the Libyan Political Dialogue Forum (LPDF) prior to his appointment this year.

According to documents obtained by The Libya Update, a senior Libyan official made a “classified and urgent” correspondence to U.N. Envoy to Libya, Stephanie Williams, in which the source pointed out the Dbeibeh to hold a bachelor degree on Civil Engineering and a masters degree on the same field from Toronto University in 1992 and 1999 respectively.

However, the source alleged that there are no official records of Dbeibeh’s diplomas from Toronto University.

Toronto University did not respond to The Libya Update’s request for comment on time.