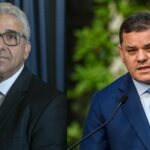 Dbeibeh and Bashagha to meet in Turkey on Sunday, Italian press reports

Citing unnamed Libyan sources, Nova said that Dbeibeh, who refuses to handover power to Bashagha, accepted to meet with his rival only after having had guarantees that Bashagha’s appointment as premier will not be the subject of discussion at the meeting.

According to Nova, U.S. Special Envoy and Ambassador to Libya, Richard Norland, and U.N. Advisor on Libya, Stephanie Williams, will also participate in the upcoming meeting.