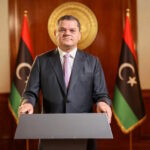 The outgoing Libyan Prime Minister, Abdel Hamid Dbeibeh, considered that designating a new government by the House of Representatives (HoR) is a “failed maneuver ”.

This came during a speech on Monday, during which Dbeibeh talked about the details of the plan for what he called “the return of trust to the people,” which guarantees the holding of elections next June.

He said that the plan would ensure that elections would be held next June, pointing out that he will resort to electronic voting to complete the elections in the event that any party resorts to violence.

Dbeibeh considered that the current political class is pushing towards a dangerous path and insisting on it to escape the elections.

He indicated that the “return of trust to the people” plan would end all political bodies, including his government.

Dbeibeh explained that committee for preparing the electoral law will refer the law to the High Council of State and from it to the House of Representatives.

0 0
Previous : 247 migrants disembark in Sicily, 129 rescued off Libya
Next : Lavrov: Russia hopes election postponement in Libya will not trigger escalation