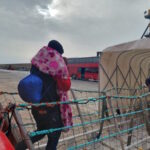 247 people rescued from the Mediterranean by the Ocean Viking have landed in Italy, after spending days at sea. Another 129 migrants were rescued by the Sea-Watch 4.

Dozens of unaccompanied minors were among the 247 migrants rescued from the Mediterranean by the private humanitarian ship, the Ocean Viking. They disembarked in the Sicilian port of Pozzallo on Saturday and Sunday (February 19 and 20) after having spent days aboard the ship, awaiting permission for a safe harbor. Some of those those on board had been seasick due to stormy seas, InfoMigrants website reported.

As well as 53 unaccompanied minors, the rescuees included a baby who is just a few months old, according to SOS Mediterranee, which runs the Ocean Viking. Aid workers from the International Federation of the Red Cross who helped to look after the migrants on board the ship said last week that some were suffering from fuel inhalation and burns and a number showed signs of torture.

The crew of the Ocean Viking had picked up the migrants during five separate rescues. The first took place in the Maltese search-and-rescue zone on February 12, when 93 people were rescued at night from an overcrowded wooden boat. Over the next 48 hours, more than 150 people were rescued in waters between Libya and Malta. SOS Mediterranee said the migrants had attempted to make the crossing because they had “no other option.”

Another private rescue ship, Sea-Watch 4, rescued 129 people in two operations on Saturday. The first small boat in distress was spotted early in the morning – 121 people were rescued. The same evening, another boat with eight people in danger of imminent drowning was sighted by the Sea-Watch aircraft and all were rescued, the organization said on Twitter. The vessel had started its latest rescue mission off the Libyan coast on Friday.

0 0
Previous : IOM condemns excessive use of power against migrants in Tripoli
Next : Dbeibeh: Designating new government by HoR is “failed maneuver”