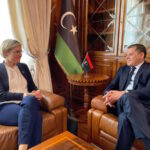 Libyan outgoing Prime Minister, Abdul Hamid Dbeibeh, discussed with the British ambassador the role of the United Kingdom in supporting stability and elections in Libya, according to Dbeibeh’s media office.

During a meeting with ambassador Caroline Hurndall in Tripoli, Dbeibeh stressed the need to support the role of UN Special Advisor on Libya, Stephanie Williams, in her efforts to support the holding of elections, in respect of the desire of nearly 3 million Libyans.

The meeting discussed the ongoing oil closure and its impact on the service and economic sector in the country, especially its impact on the supply of gas to electricity production plants, and the steps to be taken in this regard, the office said in a statement.

0 0
Previous : UK calls on Libyan authorities to hold accountable those responsible about Bougaighis murder
Next : Abu Dhabi-based W Solar to set up power plants in Libya