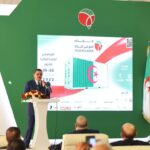 Dbeibeh inaugurates “Made in Algeria” exhibition in Tripoli

Outgoing prime minister, Abdul Hamid Dbeibeh, inaugurated on Monday the “Made in Algeria” exhibition in Tripoli, in the presence of some ministers of his government, the Algerian ambassador, Algerian businessmen among other officials.

In a speech during the event, Dbeibeh said that the Libyan and Algerian entrepreneurs “have not stopped continuing the joint work, which requires a strong political will to be carried out”.

He said that he “perceives the desire of Algeria and its president, Abdelmajid Tebboune, for Libya to be a stable country”.

Dbeibeh underlined “the fraternal activities of Algeria in all international forums in support of this trend”, hoping that the “strong partnership between Libya and Algeria will support the economy of neighboring African countries”.