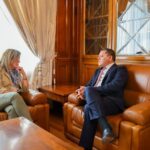 During the meeting, which took place the Libyan government headquarters, the two discussed the need to work to hold elections as a “radical solution to the Libyan crisis,” according to brief statement by the government.