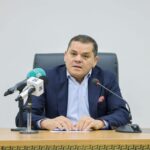 “We congratulate the decision of the General Assembly of the Supreme Court to reactivate the Constitutional Chamber,” Dbeibeh said via Twitter.

“Perhaps it will be a deterrent to abuses practiced by the parties, as well as deterrent against decisions violating the political agreement which is the constitutional document governing the stage,” he added.

“The independence of the judiciary and the existence of a ruling constitution are the basis for the stability of the country,” concluded the premier.