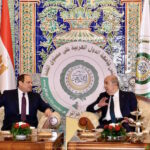 The Egyptian president, Abdel-Fattah el-Sisi, and the Algerian, Abdel-Majid Tebboune, agreed on the need to push for holding presidential and parliamentary elections in Libya as soon as possible, in their meeting on the sidelines of the Arab summit held in Algeria.

The two presidents also agreed on the need to preserve Libyan national institutions, achieve security and stability, and preserve the unity and sovereignty of the neighboring country, according to a statement by the Egyptian presidential spokesman, Ambassador Bassam Rady.

They also agreed to enhance the role of the security authorities in combating terrorism and extremist groups, and to maximize international efforts to expel all foreign forces and mercenaries from Libya.