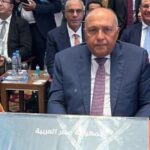 Minister Sameh Shoukry’s position was strong and clear in the face of attempts to give Dbeibeh’s government a role in managing the transitional stage under any name or justification, Abu Zeid said.

What was agreed upon was holding the elections as soon as possible, the exit of foreign forces, mercenaries and foreign fighters, and support for a Libyan-Libyan solution in accordance with UN resolutions, he added.