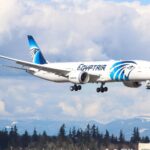 EgyptAir, a state-owned airline company in Egypt, received a high-level delegation from the Libyan Airlines headed by Hamed Esbaqa, Chairman of the Board of Directors of the company, reports news website Aviation Source.

Both sides reportedly reached an agreement has been reached for EgyptAir Training Academy to train Libyan Airlines pilots on the Airbis A320 and A330 aircraft, according to Aviation Source.

This visit is the first for the Libyan delegation of the Libyan national carrier and the EgyptAir Training Academy, within the framework of the EgyptAir’s strategy to enhance joint cooperation with Arab airlines in various fields of air transport.

The Libyan delegation was received by pilot Amr Abu Al-Ainin, head of the holding company for EgyptAir, and pilot Ihab Al-Tahtawi, head of the academy.

The Libyan delegation conducted a field tour inside the Training Academy to learn about the modern diverse training systems and programs that it offers in various aviation disciplines to trainees and students from companies and bodies in Egypt, Arab, African countries and the rest of the world.

It was agreed to train the pilots of the Libyan Airlines on the representative aircraft of the Airbus A320 and A330 model, as well as the cabin crew and engineers, and to start taking executive procedures for the work of the agreed training programs in a way that increases the size of the fruitful partnership with the Libyan airline.

According to the website, the delegation confirmed that the academy is a large edifice equipped with the latest flight simulators to train pilots of Airbus A320, A320neo, A220/300, A330/ A340, and Boeing B737-800 and B777 models, as well as a training device for cabin crew on evacuation and emergency situations CEET, servicing on the CST aircraft.

At the conclusion of the tour, the delegation expressed its great admiration for the advanced capabilities that exist within the academy, an educational and training entity at the highest level, as described by delegation’s head.