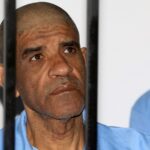 Libya’s Magarha tribe stressed that it does not know the fate of its son, Abdullah al-Senussi, former chief of intelligence in the regime of ousted ruler Muammar Gaddafi, Saudi newspaper Asharq Al-Awsat reports.

Senior member of the tribe, Sheikh Haroun Arhouma told Asharq Al-Awsat: “We will not remain silent if something were to happen to him.”

Senussi, also Gaddafi’s son-in-law, was one of the top officials in the former regime. He was sentenced to death in 2015 for suppressing the February 17, 2011, revolution protests. At 72, he is suffering from cancer, and according to his tribe, is being denied treatment and medical care.

Sheikh Haroun said Senussi’s health is “very poor”, revealing that he is suffering from heart problems, as well as liver cancer.

Several parties have held the authorities responsible for his ongoing imprisonment even though former regime figures have been released from jail.

“We have not seen him since Ramadan,” said Sheikh Haround, adding that his three children have been prevented from visiting him.

“We don’t know whether he is dead or alive,” he added.

Senussi is being held in Mitiga prison in the capital Tripoli. The facility is controlled by the Special Deterrence Force militia, headed by Abdel Raouf Kara.

Sheikh Haroun said the tribe was informed that Senussi had undergone heart surgery two months ago, but his relatives have yet to see him.

On assertions by Senussi’s daughter that he is in poor health, Sheikh Haroun declared: “I hold the UN, the Government of National Unity (GNU), headed by Abdulhamid al-Dbeibah, and the Presidential Council responsible for his safety.

He revealed that the tribe had twice met with Dbeibah, head of the Council, Mohammed al-Menfi, and High Council of State chief Khalid al-Mishri to seek Senussi’s release but to no avail.

The UN Support Mission in Libya “has done nothing even though we have pleaded with it dozens of times to act,” revealed Sheikh Haroun.

The mission has long called for the release of people who have been “arbitrarily” detained, but it also says that it refuses to become embroiled in the judiciary and respects its rulings.

0 0
Previous : EgyptAir to train Libyan airlines pilots, report
Next : Turkey says consulate in Benghazi will reopen if conditions allow it