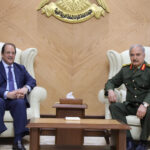 Egypt’s intelligence chief arrives in Benghazi for meeting with Haftar

Kamel is reportedly accompanied by a high-level delegation. However, it is yet unknown what will be the focus of the bilateral talks.

Earlier this month, the  Tripoli-based Government of National Unity signed a memorandum of understanding with Turkey on the exploitation of Libyan hydrocarbons.

The deal sparked strong opposition from Greece and Egypt and criticism from the European Union.

The memorandum of understanding is in fact based on the agreement for the demarcation of maritime borders signed in November 2019 in Istanbul by the former Libyan government andTurkey, which violates the maritime rights of third countries such as Greece and Egypt.