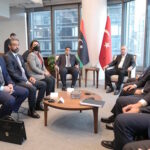 Al-Menfi and Erdogan reviewed, during their meeting on the sidelines of the United Nations General Assembly in New York, ways to achieve December elections on time, the Office said in a statement on Thursday.

The two sides discussed, in the presence of the Libyan Foreign Minister, Najla Mangoush, and the Turkish Defense Minister, Hulusi Akar, working to activate national reconciliation, the statement pointed out.

They stressed the importance of implementing all the outcomes of the Geneva Conference on Libya, in addition to discussing a number of issues of common interest, in a way that enhances bilateral relations between the two countries, it added.