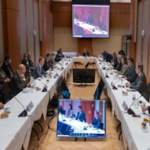 U.S. affirm its support for Libya’s presidential and parliamentary elections on December 24

U.S. Secretary of State Antony Blinken emphasized, in a ministerial on Libya in New York, U.S. support for Libya’s presidential and parliamentary elections on December 24 and urged Libya’s leaders to take the steps necessary to ensure free and fair elections as outlined by the Libyan Political Dialogue Forum roadmap, including the need for agreement on a constitutional and legal framework.

Secretary Blinken affirmed U.S. support for a sovereign, stable, unified, and secure Libya free from foreign interference, the U.S. Department of State said in a statement on Wednesday.

He underscored U.S. support for full implementation of the Libyan October 2020 ceasefire, including the removal of all foreign forces and mercenaries as called for in UN Security Council Resolution 2570, the statement pointed out.

Blinken participated on Wednesday in a ministerial on Libya on the margins of the UN General Assembly hosted by France, Germany, and Italy.  In attendance were foreign ministers of participants in the Berlin Process as well as Libya’s regional neighbors and UN representatives.

0 0
Previous : Haftar steps down from LNA leadership ahead of elections
Next : Erdogan and Menfi discuss latest political developments in Libya