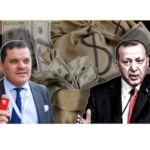 Turkish President, Recep Erdogan, demanded the Prime Minister of the of the Libyan Government of National Unity (GNU), Abdul Hamid Dbeibeh, who is visiting Istanbul these days, to pay an amount of 5 billion dinars ($3.8 billion) to the Turkish government, as “debts owed from previous years, according to press sources.

Erdogan talked to Dabaiba regarding this demand during a closed meeting between them, which lasted for a period of time before holding the official meeting with the participation of officials from both sides, Sky News report said, adding that it is not the first time that Turkey requested payment of what it says are its dues, whether for price of weapons or compensations for Turkish companies that were working in Libya.

It is noteworthy that GNU said on Saturday that Dbeibeh and Erdogan agreed to address issues of letters of guarantee for the Turkish companies contracted in Libya, and the debts accumulated for decades.