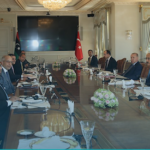 Prime Minister of the Government of National Unity (GNU), Abdel Hamid Dbeibeh, and Turkish President, Recep Erdogan, agreed to address issues of letters of guarantee for the Turkish companies contracting in Libya, and the debts accumulated for decades, according to GNU.

It is noteworthy that Dbeibeh and Erdogan held a meeting on Saturday in Istanbul, in the presence of the Governor of the Central Bank of Libya (CBL), Siddiq Al-Kabir, and a number of other officials of GNU and Turkish government.

They agreed to develop a number of administrative and technical facilities through which the volume of trade exchange will be increased, and to sign a number of agreements in this regard.

Dbeibeh and Erdogan also agreed to hold the second meeting of the Libyan-Turkish Strategic Cooperation Council in Tripoli next October, in the presence of Turkish President, Recep Erdogan, the statement pointed out.