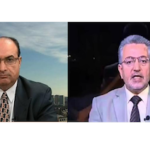 The Libyan political analysts, Khalid al-Turjuman and Kamil al-Miraash, said that Turkey is trying to obstruct holding elections in Libya, scheduled for Dec 24, 2021.

It is noteworthy that the Turkish Defence Minister, Hulusi Akar, had stated that Turkish soldiers are not foreigners in Libya, but rather continue their activities there at the invitation of the government.

The Turkish minister, Hulusi Akar, talks about Libya as if it is a province of the Turkish state, the Libyan political analyst, Khalid al-Turjuman told al-Ain News.

Turkey does not want elections in Libya; It is working through the mercenaries and the militias it controls to thwart any move to hold elections, he added.

Al-Miraash commented: “I expect these statements to have a strong impact on obstructing the upcoming elections, which is a primary goal of Turkish President Recep Tayyip Erdogan, from the beginning.”

The Turkish claim that its soldiers are not foreigners in Libya, reflects the Ottoman colonial intentions in Libya, al-Miraash explained.

0 0
Previous : GNU staff in Benghazi call on Dbeibeh to disclose fate of kidnapped official
Next : Dbeibeh and Erdogan agree to address issue of guarantee letters for Turkish companies in Libya