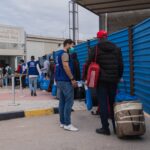 The International Organization for Migration (IOM) said on Friday that it has resumed humanitarian evacuation flights for migrants stranded in Libya after authorities suspended them for several months. The announcement comes after a massive crackdown on migrants by Libyan security forces.

The IOM said in a statement that it had evacuated 127 people to Gambia from the Libyan city of Misrata on Thursday. It said the Gambian migrants were among thousands more who are waiting to go home through the organization’s voluntary return program.

Evacuation flights for migrants have operated sporadically amid Libya’s conflict, and been periodically suspended because of fighting. The latest suspension came from the country’s ministry of interior on Aug. 8, according to the IOM.