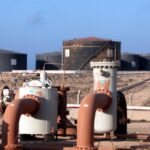 “Local forces in the regions of Cyrenaica and Fezzan are considering closing oil fields and terminals and stopping oil exports in protest at the policies of the National Unity Government headed by Abdel Hamid Dbeibah,” an informed source announced.

“The closure of the oil fields and terminals will be within ten days, in the event that the Dbeibah government continues its policy against Cyrenaica and Fezzan, and does not act as a government of national unity for all of Libya,” the source, who asked not to be named, told The Libya Updat today.

The source added that the closure “will include all terminals and fields in the Oil Crescent region, and may include El Feel, Wafa, and El Sharara oil fields in Fezzan.”