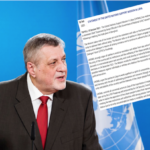 The United Nations Support Mission in Libya (UNSMIL) said on Sunday it took note of the issues set out in the statement of Cyrenaica region officials that denounced Prime Minister Abdul Hamid Dbeibeh’s policies and called on the Government of National Unity (GNU) to address them without delay.

The Mission called on all parties in Libya to engage in direct and constructive dialogue to resolve all arising concerns and to continue to adhere to the Libyan Political Dialogue Forum (LPDF)’s Roadmap.

UNSMIL “strongly” urged all parties to avoid an escalation and refrain from any action that could threaten the unity of the country and its institutions and the wellbeing of the Libyan people; pose a threat to domestic or international peace and security; and could directly or indirectly hinder the holding of elections on 24 December 2021.

It recalled the respective resolutions of the UN SC that envisage possible measures against individuals or entities who obstruct the successful completion of Libya’s political transition.

UNSMIL urged the parties in Libya to work together in a spirit of compromise, acceptance of each other, and fairness, with the aim of addressing grievances and concerns through negotiation while putting the unity and stability of the country and the interests of the Libyan people first.

UNSMIL reminded all concerned actors in Libya of the importance of respecting the 24 December election date set by the LPDF Roadmap and endorsed by the UN Security Council in its resolution  2570 (2021), in order to realize the aspiration of the Libyan people to elect their representatives democratically thus creating the new institutions and authorities with strong popular mandate and legitimacy. “The current status quo is not only unsustainable but leads to instability and division,” it said.

Libyan Deputy Prime Minister, Hussein Al-Qatrani, said the position of Cyrenaica region officials that denounced the policies of the Prime Minister, Abdulhamid Dbeibeh, came after great pressure from public opinion in Cyrenaica, and suspending financial dues of some public sectors and agencies in the region.

There is no justice in appointments to companies and embassies on the basis of regions, Al-Qatarani said in press statements on Sunday.

The budget was not presented to me, neither to most of the ministers; the Prime Minister presented it to certain people, he added.

There is no justification for Dbeibeh’s continuation to keep the Defense Minister position, and we would have liked him to tell us the reasons for that, the Deputy Prime Minister pointed out.

It is noteworthy that Al-Qatrani concluded Sunday a meeting with officials from Cyrenaica, after which a joint statement was issued accusing Prime Minister Abdul Hamid Dbeibeh of violating the Libyan political agreement and the Geneva ceasefire deal.

“The government’s presidency did not abide by the terms of the political agreement, the Geneva outcomes, and the governing principles of the [peace] roadmap,” reads the joint statement of Al-Qatrani and Cyrenaica officials.

“There are decisions issued to infringe on the competence of some ministers specified by law,” reads the statement. “The government’s presidency did not commit to defining the competencies of the deputy prime ministers, which contributed to strengthening centralization”.

0 0
Previous : Cyrenaica officials position against Dbeibeh was due to great public pressure in the region, says Deputy PM
Next : Forces in Cyrenaica and Fezzan considering oil shutdown in protest at Dabaiba’s policies, sources