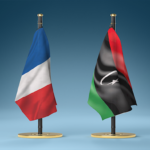 France calls on Libyan parties to refrain from violence, commit to genuine dialogue

The French Foreign Ministry has called on Libyan parties to refrain from violence and respect the ceasefire agreement, after clashes erupted in Tripoli between armed groups loyal to the outgoing prime minister, Abdul Hamid Dbeibeh, and the new prime minister, Fathi Bashagha.

“After yesterday’s violence in Tripoli, France calls on all Libya’s stakeholders to refrain from any violence and to respect the ceasefire agreement,” the Ministry said in a statement.

It called on Libya’s stakeholders “to commit to a genuine dialogue with a view to reaching a viable political solution which has to include the holding of transparent, impartial presidential and parliamentary elections throughout Libyan territory as soon as possible, in accordance with the United Nations Security Council resolutions and the expectations of the Libyan people.”