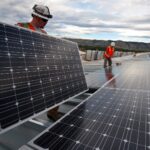 The General Electricity Company of Libya (GECOL) has signed a preliminary agreement with Total Energy for the construction of a 500 megawatt solar plant in Libya in the As Saddadah area, announced GECOL.

0 0
Previous : France calls on Libyan parties to refrain from violence, commit to genuine dialogue
Next : Di Maio and Guterres discuss Libya and Ukraine