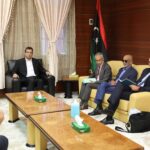 France’s Embassy in Libya plans to dedicate this month a special day for health in coordination with the Tripoli-based Health Ministry, announced French Ambassador Mostafa Mihraje on Friday.

This came following the first meeting between Mihraje and Health Minister Ramadan Abu Janah, who serves in the cabinet of Prime Minister Abdul Hamid Dbeibeh.

Mihraje made the announcement via Twitter, but he did not disclose the specific date for what he called the “Libya-France Health Day” nor did he reveal the types of events that the French embassy intends to organize to mark this day.

Meanwhile, the Tripoli-based Health Ministry said in a statement via its official Facebook page that Abu Janah and Mihraje also discussed “the medical forum that will be held in Libya during the next few period.”