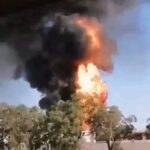 Fuel truck catch fire at gas station in Benghazi, driver save the situation

According to eyewitnesses, the truck caught fire when it was unloading fuel at the station, prompting its driver, Abdulla al-Majbari, to start the truck and move it away from the station.

Witnesses added that when al-Majbari got out of the truck, the truck was engulfed in flames spreading from its sides, as it reached some cars parked on the side of the road.

The driver’s decision to take the truck out of the gas station came out of fear that the situation would worsen as the fires would reach the ground fuel tanks, in addition to the fact that the station is in a densely populated area.