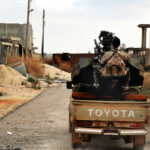 GNU-affiliated force accuses another of kidnapping its fighters

The 444th Brigade Combat Unit has accused the so-called Stabilization Apparatus of kidnapping eleven of its fighters two weeks ago in Tripoli.

The 444th Brigade Combat Unit said it made a “complaint” to the Tripoli-based military prosecutor regarding the incident.

It is noteworthy that both forces are nominally under the authority of the Government of National Unity.