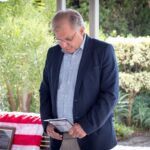 US Envoy to Libya commemorates 9/11

Richard Norland, the U.S. Ambassador and Special Envoy to Libya, commemorated on Saturday the September 11 attacks as well as the 2012 Benghazi attack, which led to the killing of former U.S. Ambassador to Libya Chris Stevens.

“On this day, we remember those who died in the terrorist attacks on the United States in 2001, as well as our colleagues Ambassador J. Christopher Stevens, Sean Smith, Tyrone Woods, and Glen Doherty who died in the attack in Benghazi in 2012,” Norland was quoted as saying by the U.S. Embassy.

“It is important to remember those people we lost. It is also important to honor their memory by working toward a better world,” he stated.

“One example among many is the Stevens Initiative, launched in 2015 as a living memorial to Ambassador Stevens to support projects that connect young people in the United States and the Middle East and North Africa,” he added.

“This year there are five active Stevens Initiative projects between American and Libyan organizations working in fields like education, business, youth engagement, medicine, and clean energy. Looking forward, may our memories of those we lost embolden us to improve our world.”