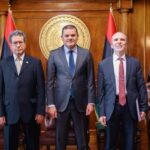 In a piece published by Al-Monitor, Pack explained that the origin of the feud started when Dbeibeh appointed Aoun “to weaken Sanallah and appease Libya’s eastern powerbrokers who had long sought his ouster.”

“In fact, Aoun was likely chosen because years ago he was part of the breakaway “Eastern NOC” scheme to weaken Sanallah and the entire NOC as a technocratic, Tripoli-centric institution,” he said.

The author said that Dbeibeh is fueling the dispute between the two to “allow himself greater control over the oil sector”.

“It appears the current tensions fundamentally derive from the bad blood between Aoun and Sanallah is possibly deliberately manipulated by Dbeibah,” Pack wrote.

“[He] maneuvered — perhaps even actively encouraged the destabilizing quarrel — to allow himself greater control over the oil sector and allow him to swoop in as the populist savior willing to appease Eastern grievances and dole out patronage.”

The American reporter warned that the battle between Sanallah and Aoun “risks destabilizing not only the oil sector but even the entire unity government.”