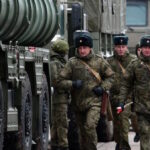 The Foreign Ministry of the Libyan Government of National Unity (GNU) announced Tuesday that it joined the international community in its appeal to Russia to refrain from launching any military operation against Ukraine.

The Ministry affirmed in a statement GNU’s commitment to the sovereignty and territorial integrity of Ukraine, calling on Russia to calm down and withdraw military build-up on the Ukrainian borders and “occupied Crimea.”

It announced GNU’s refusal to recognize the independence of “the so-called Donetsk and Luhansk Republics.”

It also announced its categorical rejection of the illegal presence of the Wagner Forces in Ukraine and Libya, and called on Russia to use the language of dialogue and diplomacy as an alternative to the language of war.